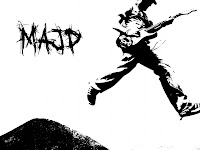 I never thought of the things I do that don’t matter as things that matter. I’ve chosen moments in my life where I intentionally done or said things that matter in order to achieve a desired response. We all do that. We act a certain way in certain situations in order to be viewed in a certain light that will affect the way others see us, at the least, and, at most, to inspire others. It’s moments like bending down and picking up trash off the ground, lending an umbrella to someone who doesn’t have one, or helping an old lady cross the street. These are all things we should be doing anyway, but we are self-conscious as we do these things hoping we’re scoring some points on some spectator's board. But receiving commendation per such action is nowhere near satisfying as the acknowledgement of the impact of one’s unintentional action on someone’s life.

Here’s some dirty laundry, kinda. And, please, don’t take this as a “don’t do this,” because there is some merit to it. I have a playful personality. I’d like to think I’m fun and relevant, especially that I’m in youth ministry. At one point I started to feel like “shot-callers” would not view me as a valid option because I may not look professional. Mind you, not looking professional is what helped me stay “in” and “cool” among the youth. Several young people told me they can’t believe I’m as old as I am because I don’t act like it. They say it in a positive way, or at least I convince myself it is. Some of them say they can’t believe I am a father, because fathers are way more serious. I took the hint, and started doing certain things so people would take me more seriously. I started attending certain meetings that people who matter attend. Being there with them would remind them that I exists, maybe even that I’m a peer. Another thing I did was changing my attired when I’m around these people. Button down shirts, better looking pants, out with the Adidas Campus, in with the dress shoes. I even grew a beard so I would look older; that scored points with the young people as well since it was “cool.” I started using a certain lingo that’s expected of “mature” people, upright posture channeling confidence (and good for my back), and before I knew it I was jumping through the hoops like some trained and tame lion; a glorified kitten. I was still nowhere I had hoped I’d be.

In the midst of all of this, someone said something to me the eclipsed everything and anything I could do to be taken more seriously. Something way more important than being taken seriously. It was something that refocused me unto what really matters. I was scrolling through my daily fix of Instagram posts and stories when I came across a video of a friend playing guitar. He’s one of the more brilliant guitar players I know. I DM’ed him and we texted back and forth for a bit. Before ending the conversation he said, “I want to tell you something that I’ve never told you before.” He continued saying that the first time he saw me was at summer camp playing the guitar. He said, “when I saw you play the guitar, then and there, I decided I wanted to pick up the guitar because of you.” Compliments of my guitar playing ability accompanied this story which was one of the most humbling moments of my life. This friend is an accomplished guitar player himself, and to hear these words from him only humbled me more and more. Honestly, I cannot remember that specific moment  at summer camp that he was talking about. But I know for sure I wasn’t trying to impress anyone there. I just was there being my whatever self doing what I love most, which is serving young people.

Refocused, I do care that I look presentable, but now I am more interested in impressing young people than “shot-callers.” I understand that at the heart of it God is at work. On that day at summer camp I was just me, a tool - pun intended, and God used me to work in some young person’s heart. The world is full of distractions; things that distract us from being what God needs us to be in order to work through us. Reflecting back on it, trying to impress whoever I was trying to impress is time I could’ve invested being me with whomever God would’ve wanted to impress through me. Nothing advances our ministry like doing the ministry we are called to do. So, I will forever be my undignified self for the sake of the ministry to which God has called me.
Posted by RuXTaR at 10:56 PM